These works form a major part of the public artwork commissioned by the Queensland State Government through their Art Built-in policy for the redevelopment of Suncorp Stadium in Brisbane.  The works are a sympathetic response to the history of the site from 1842 when it was selected as Brisbane's first major burial place for Indigenous, multi-denominational Christian and Jewish communities.  The cemetery however, was close to a swamp, and in 1875 was closed for health reasons.  It fell into disrepair and was eventually dismantled in 1914, though less than 200 of the identified 4,000 grave sites were relocated to other burial grounds.  The site became a park, then developed into an athletics track, and eventually the rugby league field well recognised today.

The curatorial brief for this artwork called for a memorial to those who were, or are interred in the site.  Veil clothes the south-east corner of the building to create a light shroud which extends over the glass panels so that it appears as an external layer of the building, but is part of its 'fabric' and structure.  Photographed from a small torn muslin model and enlarged photographically, Veil was screen-printed in opaque white ceramic ink onto 96 separate panels each 1.5m wide x 2.4m high.  The gigantic tear in the fabric can be read in numerous ways, and through this multiplicity of meanings can be seen as a metaphor for the concerns and spiritual beliefs of each community.  The tear in the cloth publicly acknowledges and openly accepts the grief that exists in all communities concerned with this burial site.  As such, it declares the site to be vitally significant, and sacred, to these communities.  It therefore contributes to the 'veiling' of this section of the building in its purpose as a stadium, and pronounces another essential use for this wall - to act as a tangible recognition of painful history and an appeasement and conductor for the expression of grief in the present.
Growth and Rhythm, artwork for the South-east Transit Busway Tunnels, Brisbane, Australia (2001)
Client: Queensland State Government
Public Art Project Manager: Chetana Anadary, Brecknock Consulting
All photos: David Sandison

As part of Queensland State Government's large South East transit busway project, Jill Kinnear produced extensive public artworks for the two of the bus tunnels, the Stanley/Vulture Street tunnel and the Upper Mt Gravatt tunnel.  Capitalising on a moving audience, Kinnear designed a solution where the movement of the viewer, not the art, created a visual experience.  Growth acknowledges the cultural, educational and recreational facilities of South Bank, while Rhythm relates to the pulse of commerce and entertainment of the Mt Gravatt area. 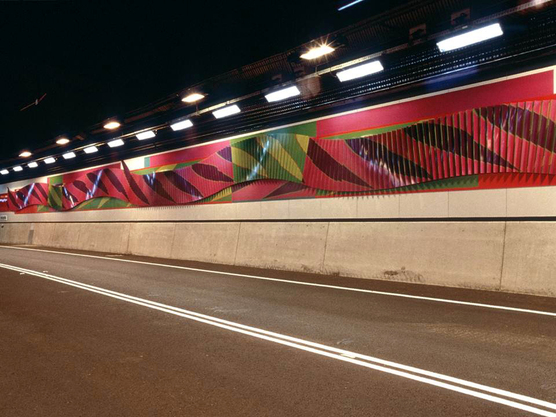 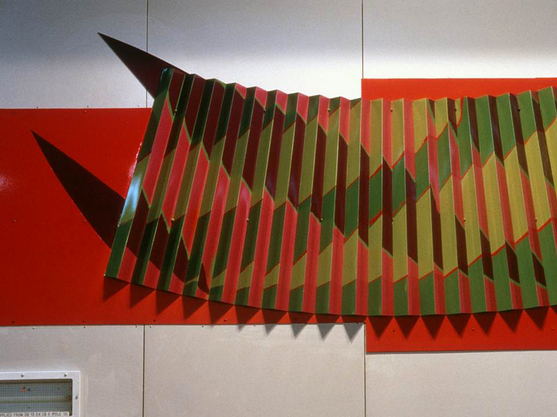